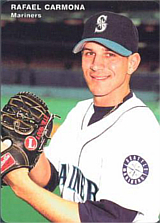 Rafael Carmona pitched four years in the majors leagues, almost exclusively as a reliever, with a record of 11-7 and an ERA+ of exactly 100.

In 1995, he pitched at the AA and AAA levels, as well as in the Majors. For AA Port City, he appeared in 15 games, had an ERA of 1.80, struck out better than 10 patters per nine innings, walked fewer than two batters per nine innings, while again posting a sub-1.000 WHIP. For AAA Tacoma, he was put into the rotation, starting eight ballgames, but with not nearly as much success as he had as a reliever. His ERA ballooned to 5.06, while he was walking more guys, giving up more hits, and striking out fewer batters. He made his big league debut with the M's on May 18, 1995, pitching 3.2 innings against the Royals in Kauffman Stadium. To celebrate his Big League debut, his hometown threw a festival in his honor. His fourth game was his first start in the Bigs, taking place on May 29 against the Yankees. Incidentally, this was Derek Jeter's Major League debut. Carmona struggled against the Bronx Bombers, giving up 7 runs in 5.2 innings, including home runs to Randy Velarde and Dion James. He did not factor in the decision, as the M's won the game in 12 innings, thanks to a game-ending home run by Rich Amaral off former Mariner Scott Bankhead. Overall for the '95 Mariners, Carmona appeared in 15 games, three starts, and put up a 5.66 ERA. He walked 34 in 47.2 innings and gave up nine home runs; his WHIP was 1.867.

Carmona began the '96 campaign back in AAA Tacoma, but only appeared in four games before being recalled. He wound up spending almost the entire season at the big league level, pitching in 53 games (one start) and compiling a 4.28 ERA. His walk rate was still rather high, but he was one of the more reliable middle relievers for that M's squad which often had trouble getting to the closing tandem of Mike Jackson and Norm Charlton.

He spent most of 1997 back at AAA Tacoma, despite being effective in four games at the big league level. (3.18 ERA in 5.2 innings.) In 32 games with the Rainiers, his ERA was a respectable 3.79, but his walk rate remained elevated, though he was giving up fewer hits and striking out more batters than he had at the big league level. His ERA+ of 116 for the season indicates that he was better than league average.

The ensuing offseason, he was injured in a car accident on November 30, 1997. He underwent surgery to repair two broken bones in his pitching arm on December 3. This injury seemed to set him back, as he posted a combined 9.99 ERA in advanced A and AA ball; he had not pitched at the AA level since 1995 and had either been in AAA or the majors since. He had a fabulous comeback in 1999, posting a 3.53 ERA back in AAA Tacoma and made it back to the Bigs for nine final games (1-0, 7.94). Unfortunately, he imploded in 2000. Pitching in only three games back in Tacoma, his ERA went into orbit at 20.25 and his career was over at 28.

During his playing career, his date of birth was listed as October 2, 1972. He passed away in 2021; at that time, his birth year was corrected to 1971. His cause of death or any details surrounding his passing were not made public. He was 49.