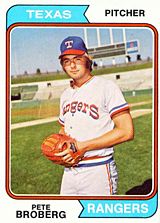 "When the Senators first drafted Pete, they tell me that Ted Williams watched him throw his fastball and told Broberg that he threw the ball as hard as Bob Feller and would never spend a day in the minor leagues... If that's the case, that might be part of Pete's problem now... Short is still clinging to that Bob Feller BS that Williams fed to Broberg." - Whitey Herzog, as quoted by Mike Shropshire, in the book Seasons In Hell

Pete Broberg pitched eight years in the majors, mostly in the American League, as a starter. He could throw fire - in 1972 he had 133 strikeouts in 176 1/3 innings. It was even claimed he threw as hard as Nolan Ryan, although that was clearly an exaggeration.

Pete and Chuck Seelbach were both at Dartmouth in 1970. Out of Palm Beach High School, Pete was the second pick of the 1968 amateur draft, after Tim Foli, by the Oakland Athletics but chose to attend college instead. The Washington Senators chose him with the first overall pick of the secondary phase of the 1971 amateur draft and brought him straight to the bigs, giving him his first major league start on June 20th, a no decision against the Boston Red Sox. He pitched well enough to stay in the starting rotation the rest of the year, making 18 starts with a record of 5-9 and a solid 3.47 ERA. He pitched 7 complete games, including one shutout, that season, blanking the Cleveland Indians, 7-0, on 5 hits on August 7th.

The Senators became the Texas Rangers after that season, and the new team was counting on Broberg to be one of its stars. However, with a dreadful team playing behind him, he had a very difficult season in 1972, going 5-12, 4.29. He lost his spot in the rotation at one point, which gave him the opportunity to register his lone career save on August 24th, against the Milwaukee Brewers. He pitched 1 1/3 innings, giving up a double to "Downtown" Ollie Brown, who later scored on a wild pitch; Mike Paul was the winning pitcher. After starting slowly in 1973, when he went 5-9, 5.61 in 22 games, a frustrated Whitey Herzog decided to have Pete right himself in AAA. It seemed to work, as he went 6-3, 3.87 in 18 games with the Spokane Indians in what was his first taste of the minors. By the end of the season, the Rangers were seriously doubting that they had a star-in-the making anymore. He started 1974 back with the big club, but was charged with a loss in his first three pitching appearances, at which point he had a 14.00 ERA, and went back to Spokane by the end of April. There, he was 4-5, 4.50 in 14 games and was back in Texas to stay by early August. He pitched a little better but did not make an appearance after September 2nd, finishing the year 0-4 with an 8.07 ERA in 12 games. The Rangers gave up on him, trading him after the season to the Milwaukee Brewers for Clyde Wright.

With the Brewers in 1975, a team that lost 94 games, things were briefly good. Pete was 14-16 as the winningest starter on the team and posted the lowest ERA of the starting rotation while pitching 220 innings, the sort of performance expected of him when he was drafted. His teammates that year included the 19-year-old Robin Yount and the 41-year-old Hank Aaron. He turned back into a pumpkin in 1976, as he was only 1-7 with a 4.97 ERA in 20 games. He was left unprotected in the expansion draft after the season and taken by the Seattle Mariners, who flipped him to the Chicago Cubs. He went back to AAA and was 6-5, 5.38 in 13 starts for the Wichita Aeros, pitching in one of the most hitter-friendly parks in organized baseball. The Cubs called him up in late July 1977 and he pitched out of the bullpen the rest of the season, making 22 appearances with a record of 1-2, 4.75. He was traded to Oakland after the season and had a fairly good year in 1978. Pitching for a very young team that had been gutted by the departure of all their stars, he pitched 35 games, going 10-12 with a 4.62 ERA. He was signed as a free agent by the Los Angeles Dodgers after the season, but failed to make the team in spring training 1979, was released and retired from baseball for a decade.

Broberg played for the West Palm Beach Tropics of the Senior Professional Baseball Association in 1989. He went 8-1 in 12 starts for the club but failed to turn that good performance into another shot at the big leagues. The talent was always there in Broberg's case; it's likely that he could have had a much better career if the Senators had let him pitch in the minors for a couple of seasons to perfect his craft instead of throwing him to the wolves right out of the Ivy League.