Note: This page links to 1960s infielder Pedro Gonzalez. For others with the same name, click here. 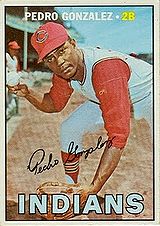 Pedro Gonzalez was one of the earliest major leaguers from San Pedro de Macoris, in the Dominican Republic. While he appeared in the 1964 World Series (and was at first base more than other positions with the New York Yankees that year), he had most of his major league at bats as a second baseman with the Cleveland Indians in 1965 and 1966. His fielding was good but his hitting wasn't very strong.

In 1967, his last season in the majors, both he and Vern Fuller appeared in 64 games at second base for the Indians. Fuller is listed as the regular, presumably because he had more fielding chances.

He died of lung disease at age 84 in January 2021, in his hometown of San Pedro de Macoris.