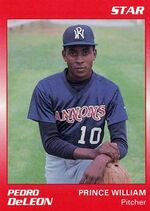 Pedro DeLeon is a former minor league baseball pitcher who played from 1984 to 1989 in the Houston Astros and New York Yankees organizations.

He spent his 1988 season with Osceola and the Columbus Astros, going 14-5 with a 2.44 ERA in 23 games with Osceola and 2-2 with a 4.50 ERA in four games with Columbus. Combined, he went 16-7 with a 2.68 ERA. He was 8th in the Florida State League in ERA, third in wins (behind Jerry Kutzler and Darrin Hursey), third in strikeouts (129, trailing Chris Nichting and Ravelo Manzanillo) and tied for first with 5 shutouts, even with Mark Petkovsek.

On January 10, 1989, DeLeon was traded with John Fishel and Mike Hook to the Yankees for Rick Rhoden. 1989 would end up being his final season in professional baseball. He played for the Prince William Cannons and Albany-Colonie Yankees, going 3-2 with a 2.87 ERA with Prince William and only 3-7 with a 5.53 ERA with Albany-Colonie.