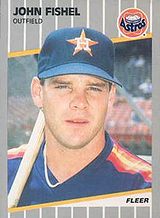 Fishel began the 1988 season with the Tucson Toros, and he hit .261 with 18 home runs and 68 RBI in 360 at-bats with them. On July 14th, he made his big league debut, against pitcher Bruce Ruffin of the Philadelphia Phillies. Pinch-hitting for pitcher Mike Scott, Fishel grounded out in his first and only at-bat of the game. Overall, he would hit .231 in 26 big league at-bats in his only season in the majors. He appeared in 19 games, hitting 1 home run with 2 RBI. The home run was perhaps the biggest highlight of his big league career. It was against pitcher Steve Peters of the St. Louis Cardinals on September 3rd. He played his final big league game on October 2nd.