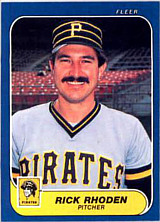 As a 8-year-old child, Rick Rhoden went on a slip-and-slide and impaled himself on a pair of rusty scissors. He then developed symptoms of polio and was diagnosed with osteomyelitis, the same affliction that affected a youngster named Mickey Mantle. He used a cane to walk with until the age of 12 and underwent an operation to remove part of his left knee so that it would not outgrow his right one.

In addition to being an excellent starting pitcher who won 15 games three times and was an All-Star twice, he was probably the best hitting pitcher of his era with a .238 career average, 9 home runs and 75 RBI. He started a game as the designated hitter and recorded an RBI on a sacrifice fly as a member of the New York Yankees on June 11, 1988. He pitched in the 1977 World Series with the Los Angeles Dodgers. He missed most of the 1979 season after being acquired by the Pittsburgh Pirates in a trade for Jerry Reuss, but otherwise was a workhorse, with six seasons of 200+ innings pitched.

After ending his baseball career, pitcher Rhoden went on to win multiple celebrity golf tournaments, earning over a million dollars. He was an 8-time winner of the premier celebrity golf event, the American Century Celebrity Golf Classic, last winning in 2009. He has also played on the Champions Tour, finishing in the Top 10 at three events, peaking with a tie for 5th place finish at the 2003 Allianz Championship.