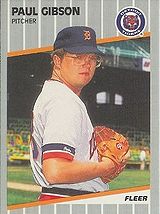 Pitcher Paul Gibson was drafted by the Cincinnati Reds in the January 1978 amateur draft. He played three seasons in their organization before being released and signed by the Detroit Tigers. In their chain, he recorded a career-best 12 saves for the Birmingham Barons in 1982. Following that season, he was selected by the Minnesota Twins in the 1982 Rule V draft. Following two years in their system, he returned to the Tigers organization. In 1987, pitching for the Toledo Mud Hens, he notched a career-high 14 wins and 7 complete games in 27 starts.

After pitching in the minors for a decade, Gibson reached the big leagues with the Tigers in 1988. He made his debut on April 8th, throwing a scoreless inning and a third of relief work in a loss to the Kansas City Royals. Later that month, on April 30th, he earned his first big league win against the Seattle Mariners. Overall, he went 4-2 with a 2.93 ERA in 92 innings over 40 appearances that summer and made the 1988 Topps All-Star Rookie Team as the left-handed pitcher. He spent part of the following season, 1989, as a starter, going 4-8 with a 4.64 ERA for Detroit in 45 games split between the rotation and the bullpen. Strictly pitching in relief the next two years, he saved 11 games as a left-handed complement to righty closer Mike Henneman.

Since his playing days, Gibson has run the All Pro Sports Academy in Bellport, New York. His son, Glenn Gibson, played in the minors.