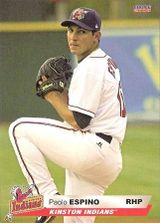 Paolo Espino made his major league debut in 2017, a few months after having turned 30 and 11 years after appearing in the World Baseball Classic while still a high schooler.

Espino was 1-1 with a 5.79 ERA for Panama in the 2004 World Junior Championship but struck out 16 in 9 1/3 IP. Only Ki-joo Han and Elier Sánchez had more strikeouts in the tourney.

While in high school, Espino played for Panama in the 2006 World Baseball Classic. He threw in one game, working the 7th inning against the Dutch national team. He retired Ivanon Coffie on a grounder to first, Espino covering the bag on the play. He then walked Sidney de Jong but struck out Sharnol Adriana. Percy Isenia singled but Espino retired Dirk van 't Klooster on a grounder to end the inning.

Espino pitched for Panama in the 2009 World Baseball Classic. He relieved Angel Cuan in the 7th inning of the loss to Puerto Rico, at the same time another Espino, Damaso Espino, came in to catch. There was one out and one man on. Paolo began by intentionally walking Alex Rios. Ivan Rodriguez then hit a 3-run homer and Geovany Soto singled. Jesus Feliciano doubled and Felipe Lopez was walked intentionally. Espino finally got an out on his 6th batter, getting Mike Aviles to hit into an inning-ending double play. In the 8th, Espino retired Ramon Vazquez on a grounder but Carlos Beltran and Andy Gonzalez singled. Rios flew out and Rafael Medina then relieved Espino.