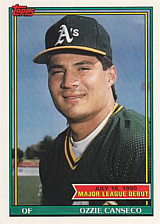 Ozzie was drafted in the 2nd round by the New York Yankees in 1983. He was primarily a pitcher from 1983-1985, his best performance coming in 9 games with the Gulf Coast Yankees in 1985 with a 1.57 ERA. Later, as a Double A position player in 1989, he pitched 3 games for the Huntsville Stars. He was converted to a position player beginning in 1985. He showed some power; in his 1990 season in Huntsville, he hit 20 home runs in 97 games. In 1992 in Triple A with the Louisville Redbirds, he hit 22 home runs in 98 games. In 1990, he was up in the majors part of the season, with the Oakland Athletics when they won the pennant. He did not appear in postseason play. After an unsuccessful audition with the Kintetsu Buffaloes in 1991, he back in 1992 for part of the season with the St. Louis Cardinals. He also had 6 games with the Cards the following year, batting just .200 in the bigs with no home runs in 65 at bats. He came back in 2000 and 2001 with the Newark Bears of the independent Atlantic League. He hit 48 home runs in 2000 and was named Atlantic League Player of the Year, having set an independent league record for home runs in a year, 9 more than John O'Brien (another player overshadowed by his brother). The following year, he played 38 games, hitting .207.

Ozzie is the twin brother of Jose Canseco. The two were briefly teammates with the A's in 1990, and their combined major league home run total stands at 462 - all Jose's work. In 2011, he was named bench coach of the Yuma Scorpions in the North American League, assisting his brother who was named manager. Ozzie managed the Edinburg Roadrunners in 2013.

"Speaking to Sports Illustrated in 1994, Ozzie lamented the peculiar reality of resembling his brother in every aspect but the one that mattered to him most. 'It’s difficult to explain my existence as Ozzie Canseco on a daily basis.'" - Ozzie Canseco, quoted in a biography at Mental Floss [1]