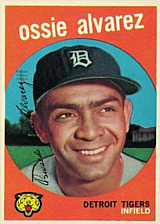 Ossie Álvarez debuted in the major leagues as an infielder for the Washington Senators in 1958. He appeared in 87 games, had 196 at bats and 41 hits for a .209 average. He was traded twice before the start of the 1959 season, first on October 27th to the Cleveland Indians for veteran utility man Jay Porter, then on November 20th he was part of a major trade involving the Indians and the Detroit Tigers in which he and two top pitchers, Don Mossi and Ray Narleski, were sent to Detroit for Billy Martin and Al Cicotte. Ossie appeared in 8 games for the Tigers, getting one hit in two at-bats for his only other major league experience.

Álvarez started his minor league baseball career in 1952 with the Class C Big Spring Broncs. Ossie performed in eight leagues with 14 teams before getting his chance in the major leagues. His best season in the minors came in 1957 in the Southwestern League with the Midland Indians / Lamesa Indians. He appeared in 119 games, had 473 at bats with 171 hits for a .362 batting average. He tried his hand at pitching one game in 1956 with the Hobbs Sports and went 0-1. The 5' 10", 165 pound infielder was primarily known for his speed, having twice led baseball's minor leagues in stolen bases and, after his major league retirement, leading the Mexican League in stolen bases with 27 at age 30 in 1964. He retired from active playing after two games with the Jalisco Charros in 1966.

Ossie went to the Mexican Center League as manager for the Fresnillo Mineros in 1966. The team finished at 61-76 and Ossie was replaced by Marco Manzo. He also managed the Mexican League Durango Alacranes in 1974 and the Mexico City Tigres in both 1990 and 1991. Álvarez remained in baseball as a Latin American scout for the Pittsburgh Pirates for many years before joining the expansion Arizona Diamondbacks in the same capacity in 1996. He died in Guadalajara, Mexico on March 8, 2008.