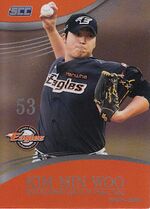 Min-woo Kim has pitched in the KBO and the Olympics.

Continuing to progress, he opened 2021 at 9-5, 3.89. He made South Korea's team for the Tokyo Olympics (though the baseball portion was played in Yokohama). He debuted against Team USA, relieving Woo-suk Go in the 6th with a 4-1 deficit. He cruised through five batters (Todd Frazier, Eric Filia, Mark Kolozsvary, Bubba Starling and Nick Allen, fanning Kolozsvary before Jin-uk Kim took over. He then started versus Israel against Joey Wagman. He retired the first 11 batters, including Ian Kinsler and Danny Valencia twice, before Ryan Lavarnway singled. Won-joon Choi relieved with one out and one on in the 5th with Korea up, 3-0, and let the inherited runner score to ruin Kim's perfect ERA so far on the Games. [2]