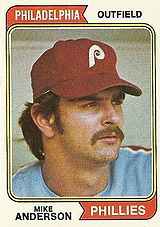 "His limitations are limitless." - Phillies manager Danny Ozark on Anderson

Outfielder Mike Anderson is the brother of infielder Kent Anderson. He was one of several Philadelphia Phillies outfielders in the early 1970s who showed promise but did not attain stardom. Anderson had a powerful arm and pitched a game in relief for the Phillies in 1979, throwing a scoreless inning against the Chicago Cubs. He struck out the first two batters he faced: Jerry Martin and Mike Vail. Anderson also played for the St. Louis Cardinals and Baltimore Orioles.

Anderson showed power and average in his early years in the minors. A first round pick in 1969, he hit .364 and slugged .623 in the rookie league that year. The following year, he hit .313 and slugged .545 in A ball. In 1971, he played for Eugene at the AAA level, hitting .334 with 36 home runs. By comparison, Greg Luzinski was a teammate at Eugene and the same age, 20, and Luzinski hit 36 home runs with a .312 average. Larry Hisle hit .328 and Oscar Gamble, in a partial season, hit .290 for Eugene, so Anderson was doing as well or better than some players who went on to have big major league careers. The following year at Eugene, Anderson hit .298 with a .515 slugging average while Mike Schmidt, one year older, hit .291 with a .550 slugging average. Gamble hit .292 and Andre Thornton hit .319 in partial seasons.

He is not to be confused with Mike Anderson, a pitcher who played in the majors in 1993.