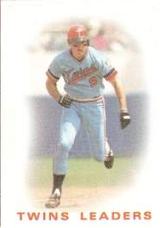 Mickey Hatcher had a 12-year career in the major leagues. Although he drew few walks and had little home run power, he typically had a good batting average and was able to play outfield, third, and first base defensively. His whole major league career was with two teams, the Los Angeles Dodgers and Minnesota Twins, and in the 1988 World Series he slugged .737, batting third in the lineup.

Hatcher was one year older than Pedro Guerrero, and as youngsters the two competed for playing time on the Dodgers. He first came up in 1979, when he hit .269 in 33 games at the end of the season. He spent most of 1980 in Los Angeles, hitting .226 in 57 games as a utility player. Following that season, he was traded to the Minnesota Twins along with a couple of minor leaguers who never reached the majors, in return for CF Ken Landreaux. In 1981, he was the Twins' regular center fielder, hitting .255 in 99 games in the strike-shortened season. Interestingly, he had only played one game at the position with the Dodgers, and would only play one more time there in his remaining time in the majors, as he did not really have the foot speed for the position. In 1982, the Twins promoted a slew of rookies to the big league team, and it left the 27-year-old Mickey looking for scraps of playing time on a very weak team. His best positions were all manned by youngsters: 22-year-old Kent Hrbek at 1B; 23-year-old Gary Gaetti at 3B; 21-year-old Tom Brunansky in RF; and 23-year-old Randy Johnson at DH. Only in left field was there someone from his generation, Gary Ward who was 28, but he was the Twins' only veteran position player and their best hitter, so he was not going to give way. Another rookie and a former teammate in the Dodgers' minor league system, Bobby Mitchell, manned center field; he was Mickey's age, but a much better defensive player, even if he did not hit much. Hatcher hit .249 in 84 games in what must have been a very frustrating season.

That group of young players gelled into a solid team over the next few seasons, and Hatcher managed to find more playing time, playing over 100 games every year in Minnesota from 1983 to 1986. In 1984, with Ward gone, he became the regular left fielder and had his best year, hitting .302 in 152 games, after batting .317 in part-time duty the year before. He continued to post good batting averages the next two years as his playing time diminished but was released at the end of spring training in 1987. The Dodgers, whose core of players that had carried them to a string of five division titles in nine years from 1977 to 1985 was now past its prime, needed all sorts of reinforcements by that point and brought Hatcher back to round out the roster. He thus missed the Twins' run to the 1987 World Series, just as he had missed the Dodgers' to the 1981 World Series. He played 101 games in 1987, hitting .282 with 7 homers and 42 RBIs to secure a job for the next year. In 1988, the Dodgers had a very uneven team, with some areas of great strength, mainly the starting pitching, the catching, and the tremendous season of NL MVP Kirk Gibson in the outfield, and others that were well below average, such as shortstop. Another problem was first base, where, after the trade of Pedro Guerrero for starting pitcher John Tudor in mid-season, Franklin Stubbs hit just .223. Hatcher had hit a lot better, largely as a pinch-hitter, with a .293 average and 25 RBIs in 88 games, and when the postseason rolled around, Tommy Lasorda decided to use him as his first baseman in place of Stubbs. It proved an outstanding move as he hit decently in the Dodgers' upset of the New York Mets in the NLCS, and then had a fantastic 1988 World Series, batting .368 and slugging .737 as the Dodgers pulled off another upset, defeating the heavily-favored Oakland Athletics in five games. In fact, Hatcher hit more homers in the series - 2 - than he had during the entire season - 1. He remained with the Dodgers for two more seasons after that, hitting a solid .295 in 1989, but then slumping to .212 in 1990. Given that batting average was his entire game, he retired at that point. In 1130 games over 12 seasons, he had hit .289 with 38 homers and 375 RBIs.

Since his playing career ended, Mickey Hatcher has been a Texas Rangers coach in 1993 and 1994. After several seasons as a minor league manager, he spent part of the 1998 season on Los Angeles Dodgers coaching staff. Hatcher was also a minor league coach for the Albuquerque Dukes (1992, 1999) and Great Falls Dodgers (1995). From 2000 to 2012, Hatcher was a Los Angeles Angels coach under former Dodgers teammate Mike Scioscia. He was fired from his position as hitting coach on May 15, 2012, with the Angels in general and Albert Pujols in particular, off to a dismal start at the plate. He was replaced by Jim Eppard.

Hatcher also played college football as a punter and wide receiver at the University of Oklahoma and participated in the 1977 Fiesta Bowl. He was at Oklahoma at the same time as Joe Price.

His brother, Hal Hatcher, was a catcher in the Kansas City Royals farm system in the early 1980s.