Note: This page is for Matthew Williams, pitcher for the Australian national team. For others with similar names, click here. 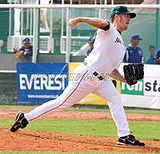 Matthew Williams signed with the Minnesota Twins shortly before his 17th birthday. In the 2004 World Junior Championship, he allowed 5 hits and 3 runs in 2 innings, taking a loss. He debuted in Australia in the 2005 Claxton Shield for the Australian Provincials, allowing 5 runs in 2 1/3 innings and taking a loss. Matthew made his USA debut later that summer, pitching for the GCL Twins (3-2, 3 Sv, 1.93, 42 K in 37 1/3 IP) and Fort Myers Miracle (0 R in 2 IP). In 2006, the right-hander allowed 3 runs in six innings for the Australian Provincials.

He did make his Australian national team debut in the 2009 Baseball World Cup. He allowed a two-run homer to Kuo-Min Lin to blow a 5-3 lead over Taiwan but Australia rallied to win. He then got the win over Team Canada. He again served up a two-run homer, to Abel Martínez of Mexico, to close a 6-3 lead to 6-5 but Adam Bright came in to relieve and Australia hung up (with three other pitchers wrapping up the inning after Williams). In a 2-2 game against the Dutch national team, he came up big, relieving Bright with two on and retiring Sidney de Jong in the clutch. Australia scored 3 in the bottom of the 8th and Williams faced the minimum in the 9th for the win. He finished the event 2-0 with a 6.35 ERA in five games. In the 2009/2010 Claxton Shield, he pitched two games but allowed five walks and five runs in one inning to post the tournament's highest ERA.

Williams was a member of the Australian national team in the 2013 World Baseball Classic. In his lone outing, he relieved Brad Thomas in the 8th against South Korea with a 5-0 deficit. He allowed two hits and retired two batters before Ryan Rowland-Smith relieved him.