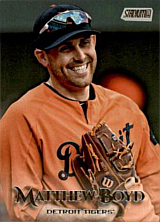 Matthew Boyd, also known as Matt Boyd, made his major league debut for the Toronto Blue Jays facing the Texas Rangers on June 27, 2015, barely two years after having been a 6th round draft choice out of Oregon State University in the 2013 amateur draft; the scout was Ryan Fox. In his debut, he was charged with a 4-0 loss, giving up 4 runs in 6 2/3 innings, three of them coming on solo home runs by Mitch Moreland, Robinson Chirinos and Rougned Odor. On the positive side, he struck out 7 and walked none. His second start on July 2nd was absolutely disastrous, as he gave up 7 runs without recording an out in a game against the Boston Red Sox; the start included surrendering back-to-back homers to David Ortiz and Hanley Ramirez. He was sent back to the minors after that performance. He was 9-2, 1.68 in 18 starts between the AA New Hampshire Fisher Cats and AAA Buffalo Bisons when, on July 30th, Toronto sent Boyd, Daniel Norris and Jairo Labourt to the Detroit Tigers for David Price.

He again shuttled between Detroit and Toledo in 2017, going 3-3, 2.82 in 8 starts in AAA, but continuing to struggle periodically in the majors until finding a groove in late August after revamping his mechanics. On September 17th, Boyd came within one out of a no-hitter in a start against the Chicago White Sox. Tim Anderson broke up the bid with two outs in the 9th, but Matt retired the next batter to complete a 12-0 one-hit shutout for the first complete game and shutout of his career. He went 6-11, 5.27 in 26 games in what was largely a disappointing season. In 2018, he became one of the Tigers' best pitchers, although the team's poor record obscured that to a large extent. In 31 games, he went 9-13, 4.39, pitching 170 1/3 innings. He set personal bests in wins, games, innings and strikeouts (159).

After the 2018 season, Boyd and his wife, Ashley, went on a mission to Uganda to try to help child slavery. The couple adopted some 36 girls and provided them with basic necessities while setting up a complex, Kingdom Home, to keep children from falling into the traps of forced labor or, worse, sexual slavery and trafficking. The shelter was originally started by a local woman who rescued the girls from the sex trade, but she was out of funds after the death of her husband, and the project was likely to fail had the Boyds not stepped in. She had reached out for help through a Christian organization for which Ashley had been active in college. They organized a number of high profile fundraising events to support the budding foundation.

Back home, Matt had a solid 2019 for another miserable Tigers squad, finishing 9-12, 4.56 with 238 strikeouts in 185 1/3 innings. He became the first Tigers pitcher since at least 1908 to record back-to-back double-digit strikeout games to start a season, striking out 10 Blue Jays on March 29 followed by 13 New York Yankees on April 3, setting a new record for a visiting pitcher at new Yankee Stadium in the latter game. Additionally, he was the first Tigers left-hander to record 200 strikeouts in a season since Mickey Lolich in 1974. On the flip side, his 39 home runs allowed paced the AL, with a league worst 1.89 home runs per 9 innings ratio.

Boyd is a distant relative of two people on opposite ends of the American spectrum: Hall of Fame pitcher Bob Feller and former First Lady Dolley Madison.