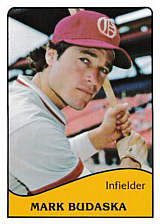 Mark Budaska played 13 games with the Oakland A's over two big league seasons, hitting .167 (6-for-36) with 2 doubles. He later served as hitting and first base coach for two teams in Taiwan from 1998-2000, moving to coaching roles in the US minor leagues. On June 9, 2017, he was promoted from Triple A to his first major league coaching job, becoming assistant hitting coach of the St. Louis Cardinals to replace Bill Mueller as part of a coaching shuffle. This was only temporary. On July 15, 2018, he was called up again, this time to take over as hitting coach for John Mabry, who had just been let go. He stayed until the end of the season, then was assistant hitting coach in 2019.