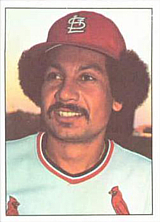 One of a group of talented outfielders to come up with the St. Louis Cardinals in the 1970s, Luis Melendez never lived up to his potential. With their outfield already overcrowded, the Cards attempted to turn Melendez into a shortstop but this experiment failed. He finished his career with the San Diego Padres.

His nickname is "Torito", which means Baby Bull.

Luis played for the Ponce Lions, Caguas Creoles and Bayamón Cowboys of the Puerto Rican Winter Baseball League. After his retirement as a player, he became one of the best managers of the league.