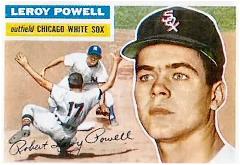 Leroy Powell scored one run in his major league career. He scored on April 20, 1957 as a member of the Chicago White Sox. He pinch ran for Walt Dropo in the bottom of the 2nd inning with the White Sox behind, 6-1. Luis Aparicio singled and Powell moved to second. Nellie Fox singled and Powell scored to make the score 6-2. Gene Host was pitching for the Kansas City Athletics. The White Sox eventually won the game, 11-7.

Powell was an All-American ballplayer and engineering major at Michigan State College who became a bonus baby in June of 1955 and thus mostly sat on the Chicago White Sox bench, getting into one game as a pinch-runner late that first season. He did not play at all in 1956 after working out as a pitcher in spring training; as the Sox were not planning to use him any more than in his first season, he asked for permission to complete his military service in the reserve officer training corps in Fort Bliss, TX. He was discharged that fall, and got married shortly afterwards to a woman he had met there. His 1957 appearance was his only one in the major leagues that year. He eventually asked for his release and received it on May 8th, allowing him to play for the Colorado Springs Sky Sox. He went 6-5, 4.86 in 28 games as a pitcher, and hit .307 in 73 games, with 13 doubles and 8 homers. In 1958, he was a full-time pitcher, going 0-2, 5.62 for the same team, while hitting only .118. In the town of Colorado Springs, CO he found an opportunity to work as an engineer, quit baseball and later moved to Las Vegas, NV to work for the U.S. Atomic Energy Commission. A civil engineer, he worked on the construction of the Air Force Academy in Colorado Springs, and that of Los Angeles International Airport.

He retired to Muscle Shoals, AL and passed away at age 80.