Note: This page is for major league infielder Lee Handley; for the minor league player of the same name, click here. 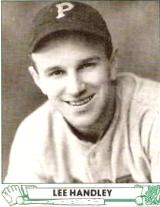 Jackie Robinson stated that Lee Handley was the first opposing player in the Major Leagues to wish him well in 1947. This story is related in The 50th Anniversary Book of the Hall of Fame, by Astor.

Lee was declared a free agent by Commissioner Landis in 1936, freeing him from the Cincinnati Reds so that he could sign with the Pirates and play alongside Arky Vaughan.