Note: This page discusses 1970s and 1980s infielder Lamar Johnson. For the college coach of the same name, click here. 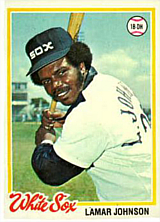 First baseman Lamar Johnson played most of his nine-year major league career for the Chicago White Sox, when they were rarely very good. He was part of the "South Side Hit Men" in 1977, one year in which the White Sox did produce.

Johnson was selected by the White Sox in the third round of the 1968 amateur draft and reached the majors with the club in 1974. The following year, 1975, he hit .336 with the Denver Bears to lead the American Association and earned another September call-up. However, the Sox acquired first baseman Jim Spencer after the season, and Johnson spent most of the next two seasons as his backup, despite hitting an impressive .302 with 18 homers in 1977. On June 19th that season, he had one of the biggest days of his career, hitting a pair of homers and and a double for the only three Sox hits in a 2-1 win over the Oakland Athletics. Before this game, Johnson sang The Star-Spangled Banner.

When the Sox traded Spencer after the 1977 season, Johnson became a regular, splitting time between first base and designated hitter. He hit .309 with 12 home runs in 1979, but generally his numbers were below what was expected, and he was subpar defensively. He became a free agent and signed with the Texas Rangers prior to the 1982 season and retired after a year with the club.

In 1989, Johnson played for the St. Petersburg Pelicans of the Senior Professional Baseball Association. He hit .372 in 25 games with the club. In the league's championship game against the West Palm Beach Tropics, he hit a home run and drove in three runs to help lead the Pelicans to the title. Johnson was named the "Star of Stars", the name given to the MVP of the championship game. In 1990, Johnson again played for St. Petersburg Pelicans; he appeared in 7 games and batted .368 before the league folded.

After his playing days, Johnson was coach of the Denver Zephyrs in 1991-1992 and manager of the Stockton Ports in 1993 and 1994. He was then a Milwaukee Brewers coach for four seasons from 1995 to 1998. He was a member of the Kansas City Royals staff from 1999 to 2002 and was a Seattle Mariners coach in 2003. He was a coach for the St. Lucie Mets in 2004 and served as the minor league hitting coordinator for the New York Mets for 10 years before being named the team's major league hitting coach on May 26, 2014, following the firing of Dave Hudgens. As the Mets' hitters did not show much improvement after the change, he was not retained in the position after the end of the season.