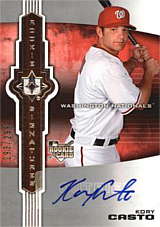 Kory Casto played 82 games in parts of two seasons with the Washington Nationals.

In 2005, Kory was named the Washington Nationals Minor League Player of the Year. He led the system in runs scored (86), walks (84) and RBI (90) while chipping in 22 home runs and 36 doubles. Playing for the Potomac Cannons, he made the Carolina League All-Star team for his offense and defense, with his fielding percentage improving significantly to .956. Baseball America named him the best defensive third baseman in the circuit as he led the league in fielding percentage, double plays (39) and assists (271), als rating him the league's 15th-best prospect and Washington's 5th best prospect. Moving up to the Harrisburg Senators, Kory repeated as Nats Minor League Player of the Year, hitting .272/.379/.468 with 84 runs scored, 80 RBI, 81 walks (tied for Eastern League lead with Kurt Airoso) and 20 home runs in 2006. Two troublesome points were his 104 strikeouts and his .189 average against southpaws. He moved back to the outfield during the season as Ryan Zimmerman was now the Nationals' third baseman for years to come. Casto led the Nationals farm system in runs scored, hits (142), total bases (243), RBI, walks, OBP, slugging and extra-base hits (53), while tying Josh Whitesell for the Senators home run lead (21). Despite moving back to the outfield for a chunk of the season, he still led EL third basemen in double plays (21). Casto was rated the EL's 14th best prospect by Baseball America, one spot behind Kevin Kouzmanoff, and he made the league All-Star team in the outfield, earning EL Rookie of the Year honors. Baseball America determined Kory's to be the best strike zone discipline of all Eastern Leaguers.