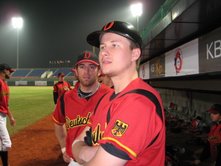 Kai Gronauer has been a regular on the German national team since he was 18 years old and is currently a minor league player in the New York Mets system.

Gronauer hit .250/.280/.417 in the 2008 Final Olympic Qualification Tournament as Germany's cleanup batter; 4 of his 6 hits were doubles and he tied for the team lead with 2 RBI. He also threw out 5 of 11 attempted base-stealers, including four in a game against Australia. He scored Germany's only run in a 2-1, 10-inning loss to Canada, doubling against Jamie Richmond in the 6th and scoring on a Jendrick Speer two-bagger in a near-upset.

Gronauer signed a two-year deal with the New York Mets in April of 2008 and was expected to begin his minor league career that season. It was a major blow to the Solingen Alligators, who bid farewell to Gronauer at a game shortly after his signing. He remained with the team for several more weeks than originally expected due to visa issues. Gronauer has hit .433/.536/.642 in his 17 games in Bundesliga in 2008 (through June 8); he was among the Northern division leaders in runs (28, tied for first), triples (2, tied for second), steals (11, tied for third), hits (29, tied for second), OBP (2nd), slugging (4th) and OPS (2nd). He had also won Bundesliga's first Player of the Week Award in 2008. He also caught a perfect game by Enorbel Márquez on May 24. He finished second in the northern Bundesliga-1 in OPS, a distant 217 points behind Chris Beck.

Gronauer made his belated US debut in 2008 with the GCL Mets. He was a backup catcher in their June 25 win over the GCL Cardinals and did not bat. He got his first start a couple days later and had a rough game, going 0 for 4 with a passed ball and an error. Eight days later, Gronauer went 2 for 3 with 2 RBI in his third game. After 9 games in the minors, he was hitting .444/.464/.481 with 8 RBI, but was only playing about twice a week despite his success. Gronauer finished his first minor league season with a .356/.408/.378 line in 16 games. He threw out 6 of 10 attempted base-stealers and drove in 10 runs. No player on the GCL Mets had a better OPS in more at-bats.

As a youth in Solingen, Germany, he played several sports, including soccer, tennis, swimming and handball. He was first exposed to baseball at age 10 or 11, when a friend took him to a practice game for a local team.

His parents don't fully understand the game or its terms. He promised to buy his mother Cornelia a ticket to see him play in America as soon as he plays in Citi Field, but she is scared of flying. His father Achim owns a pocket-knife factory and hopes to come to the States soon to see his son play for the Sand-Gnats.