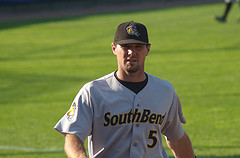 Brashear was a member of Team USA which won Gold at the 2001 World Youth Championship. He hit .200 with no extra-base hits and 6 runs as the first baseman on a club which included Lastings Milledge, Chris Valaika, Xavier Paul, Sean Rodriguez, Chris Lubanski and Jarrod Saltalamacchia as fellow position players. After being named All-State after a .385 senior year in high school, Justin was chosen by the Anaheim Angels in the 25th round of the 2003 amateur draft.

In 2007, Justin played for the South Bend Silver Hawks, hitting .194/.395/.278 with 81 walks in 82 games. He led all Arizona farmhands in free passes but had no other aspect to his offensive game. He was one walk shy of the Midwest League lead. He also paced MWL catchers with a .995 fielding percentage.