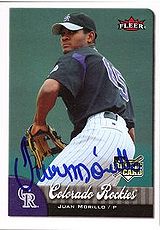 Morillo signed with the Rakuten Golden Eagles for 2010. He debuted on March 27th with one walk in two-thirds of an inning. Injuries limited him to 7 games (9 K, 5 BB, 3 H, 2 R in 6 2/3 IP) while he peaked at 99 mph on the radar gun. He left the team the next year, citing stress related to the earthquake and tsunami that ravaged the area around Rakuten's stadium.