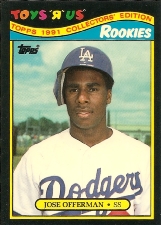 José Offerman played fifteen years in the major leagues and in 2008 played for the Veracruz Eagle, hitting .317.

Offerman, born in San Pedro de Macoris, D.R., was signed for the Los Angeles Dodgers by scouts Rafael Avila and Elvio Jimenez on July 24, 1988. Offerman played in the Dodgers organization from 1988 to 1995, coming to the majors originally in 1990. In his major league debut, on August 19th, he homered off Dennis Martinez of the Montreal Expos to lead off the bottom of the 1st; he went 3 for 5 with a stolen base in that game, but the Dodgers still lost, 2-1. He did not hit another homer until 1992. After his major league career declined, he played in independent ball, Dominican ball and minor league baseball.

Offerman had over 1,500 major league hits, and drew walks well, with a .360 lifetime major league OBP. He twice led the American League in triples and he was a two-time All-Star. In addition, he led the National League in sacrifice hits in 1993.

He was listed on the Dominican roster for the 2007 Pan-American Games but did not play.

In August, 2007, Offerman was suspended indefinitely while playing for the Long Island Ducks. Offerman was hit by a pitch from Matt Beech, charged the mound with his bat, breaking Beech's finger and giving catcher John Nathans a concussion which could keep him out for the rest of the season. Offerman posted a $10,000 bond after being charged with two counts of second-degree assault and was given two years of probation. [1]. He was later sued by Nathans for damages. [2]

Offerman hit .200/.273/.200 for the Tigres del Licey in the 2008 Caribbean Series but they won the Series despite his struggles. He was managing Licey in a playoff game against the Gigantes del Cibao on January 16, 2010, when he was involved in another ugly incident. Disputing the ejection of his catcher Ronny Paulino, for arguing balls and strike with the home plate umpire, he punched first base umpire Daniel Reyburn to the ground, and had to be escorted from the stadium by police. He was banned for life from the league for the attack. The ban was lifted as he was back managing Licey in 2013-2014, winning the pennant.