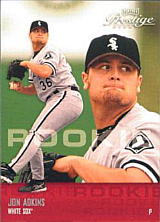 Jon Adkins pitched six seasons in the major leagues. In 2008, he had 30 saves in Triple A for the Louisville Bats.

Adkins signed with the San Diego Padres in 2006 and was in the bigs most of the season, appearing in 55 games with a 3.98 ERA. He also appeared in 13 games with the Padres' Portland Beavers affiliate in the Pacific Coast League with an ERA of 1.38. Following the season, Adkins was traded to the New York Mets. He spent most of 2007 with the AAA New Orleans Zephyrs, appearing in one game in the bigs in late July. After the season, he became a free agent and signed with the Cincinnati Reds, making four appearances with the Reds late in 2008. In 2009, Adkins pitched in Korea for the Lotte Giants. He debuted on April 4 with a perfect inning against the Seoul Heroes. In 50 games, he was 3-5 with 26 saves and a 3.83 ERA, tying Yong-chan Lee for the league lead in saves. It would be his only season in Korea. In late 2010, he became a scout for the Boston Red Sox. He signed Travis Shaw.