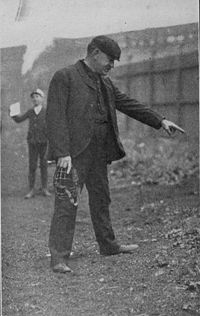 Jack Sheridan was an umpire in Major League Baseball. In his 30-year career as an official, he worked 18 seasons between 1890 and 1914 in three major leagues.

Sheridan was born in Decatur, IL, but during his childhood his family moved to San Jose, CA, where he would make his home thereafter. He enjoyed a brief career in the minor leagues as a second baseman in 1884-1885, but turned to umpiring soon after traveling with a team of California players for an eastern tour.

He began his career by umpiring in the Southern League in 1885, then officiated in the California League from 1886-1889, after which he gained his first major league experience in the sole season of the Players League in 1890. Nearly all games in that era used a single umpire, and the most outstanding officials generally moved from league to league, going wherever the league presidents were perceived as being most supportive, both in salary and in affirming the umpires' field authority. After returning to the California League for the 1891 season, Sheridan umpired in the National League in 1892, then again in the Southern League in 1893.

In 1894 and 1895, he umpired in the Western League, where he first became associated with that league's president, Ban Johnson. Johnson was fiercely supportive of his umpiring staff, and apart from a brief return to the NL in 1896 and 1897, Sheridan would remain an umpire in Johnson's league for the remainder of his career. In 1900, the Western League added several eastern cities and renamed itself the American League, and through a series of signings of NL players successfully established itself as a rival major league the following year. In contrast to the rowdier NL, where umpires were routinely subjected to great abuse with little backing from the league office, Johnson staunchly defended his field officials and insisted that players and local authorities maintain respect for them.

Over his 14 seasons as the dean of AL umpires, Sheridan became the prototype of the 20th century umpire. Whereas umpires in the 19th century had worked behind the plate in a standing position, believing that it helped them to better observe the flight of the ball, Sheridan established the practice of crouching while calling balls and strikes, a move which was quickly adopted universally due to its effectiveness. He was also remarkable in that he refused to use any sort of protection other than a mask, and was agile enough to reportedly never be hit by a foul tip. He became the standard after which other umpires patterned themselves; after arriving in the AL at age 22 in 1906, Billy Evans regularly worked in a team with Sheridan for several years in order to study under the senior umpire, with Sheridan usually working behind the plate and Evans on the bases. Both Evans and fellow Hall of Famer Bill Klem regarded Sheridan as the game's greatest umpire.

Sheridan umpired in four of the first seven World Series: 1905, 1907, 1908 and 1910; he also umpired in the earlier Temple Cup NL championship series in 1896. In the winter of 1913-1914, he and Klem were the two umpires accompanying the Chicago White Sox and New York Giants on their world tour. Along with Bob Emslie and Tim Hurst, he is one of only three umpires who umpired both before 1893, when the pitching distance was only 50 feet, and also after the NL and AL formally recognized one another as major leagues in 1903. He is the only umpire active prior to 1893 who went on to officiate in a World Series. In a famous incident on April 29, 1902, he refused to grant John McGraw first base despite McGraw being hit by five pitches; he said McGraw did not try to get out of the way.

He suffered sunstroke while umpiring a game at Chicago, IL in August 1914, and never fully recovered from the affliction. He called his last game on September 24th at Chicago, and despite the pleas of fellow officials insisted on remaining in the city for the crosstown series between the White Sox and Cubs before traveling to his home in California. Once there, his condition continued to deteriorate until he died three weeks later at age 52, at the San Jose home of his sister.

Sheridan was among the several umpires who were named to a Roll of Honor by the Hall of Fame in 1946, at a time when no umpires had yet received full membership in the Hall. In the initial voting for induction of umpires in 1953, he finished third in the voting behind inductees Bill Klem and Tommy Connolly, and was the only other candidate to receive a first-place vote.

Some or all content from this article is licensed under the GNU Free Documentation License. It uses material from the Wikipedia article "Jack Sheridan".