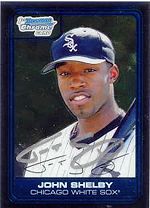 Infielder John Shelby played in the minor leagues from 2006 to 2012. He is the son of John Shelby, the brother of Jeremy Shelby and JaVon Shelby and a cousin of Josh Harrison and Vince Harrison.

Shelby was a high school star, winning the Gatorade Player of the State Award for Kentucky as a senior in 2003. Undrafted, he went on to college, hitting .271/.364/.464 as a freshman. In 2005, he batted .344/.373/.558 as Kentucky's top threat. He stole 23 bases in 29 tries, four behind Southeastern Conference leader Eli Iorg, another son of a major leaguer. Shelby was named as a second-team All-SEC player by the conference's coaches and was invited to Team USA tryouts. As a junior, he produced at a .291/.388/.629 clip with 18 home runs, 56 runs and 56 RBI in 59 games. Kentucky finished 17th in NCAA Division I. He again made second team All-SEC. Shelby finished 6th on UK's career home runs list (36) and seventh on the all-time steal leaders (42), the only player in school history to top 35 in both departments.

Shelby was signed by the Chicago White Sox and scout Mike Shirley as a fifth round pick in the 2006 amateur draft. He made his pro debut that season and hit .272/.332/.440 with 8 homers with the Great Falls White Sox. Baseball America named him the best athlete in the White Sox 2006 draft class. Shelby hit .301/.352/.508, smacked 16 home runs, and swiped 19 bases (in 27 tries) for the Kannapolis Intimidators in 2007. Of his 147 hits, 35 were doubles and nine were triples. He scored 83 runs and drove in 79. He led White Sox farmhands in triples, 3 behind Anthony Jackson for the South Atlantic League lead; he was second in the SAL. He ranked among White Sox minor league leaders in almost every department, including second to Jason Bourgeois in hits. Baseball America rated him as the #8 prospect in the Chicago system.

The White Sox signed him to a minor league contract in the 2012-2013 offseason, but he was released before the 2013 season began.

After his playing career ended, Shelby worked as an amateur scout with the Milwaukee Brewers from 2014-2016 covering central & north Florida. In 2018 he returned to the University of Kentucky to finish his degree and worked with the baseball team as a student assistant coach.

The Boston Red Sox hired Shelby to coach the Greenville Drive in 2020 before COVID-19 shut down the minor league season. Shelby was an assistant coach for Greenville in 2021.