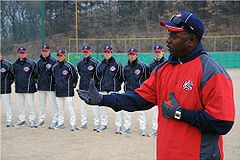 Post-baseball, he has worked with Barry Larkin as a "sports diplomacy envoy" with the US Department of State.

This biographical article is missing the person's: birth place
Retrieved from "https://www.baseball-reference.com/bpv/index.php?title=Joe_Logan&oldid=733916"
Categories: