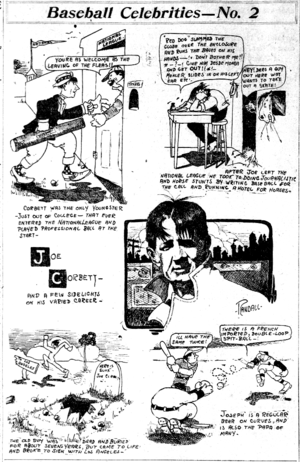 The brother of heavyweight boxing champion James J. Corbett, Joe Corbett went 24-8 for the Baltimore Orioles in 1897. The team featured John McGraw, Hughie Jennings, Joe Kelley, Wilbert Robinson and Willie Keeler, among others. It would prove to be Corbett's lengthiest big league look. He refused to report for the 1898, instead becoming a sportswriter for the San Francisco Call saying he did not like playing on the east coast and pitching some semipro ball.  In 1903, he was brought out of organized ball retirement to play for the San Francisco Seals in the newly formed Pacific Coast League.  He suited up for 14 more games with the St. Louis Cardinals in 1904, but the magic of his time with the Orioles was long gone.