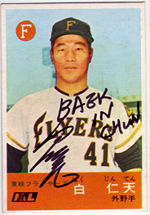 Jinten Haku was a productive hitter in Nippon Pro Baseball for 19 years, making four All-Star teams and leading the league several times in various categories. He then became a player-manager in his native South Korea and had the only .400 season in the history of the Korea Baseball Organization. In South Korea, he is known as In-chun, In-cheon or In-chung Baek.

In 1979, the veteran batted .340/.378/.549 for Lotte with 18 home runs. He finished third in the Pacific League in average (behind Hideji Kato and Hiromasa Arai) and slugging (behind Charlie Manuel and Kato). He made his fourth and final All-Star team. Overall, he was 11 for 21 with 6 RBI in nine All-Star Games in Japan.

When the Korea Baseball Organization was formed in 1982, Haku helped play a leading role. He became the player-manager of the MBC Blue Dragons and hit .412/.497/.740 with 19 homers. 33 years later, he remains the only .400 hitter in KBO history. He had the slugging and OPS records until Eric Thames in 2015. He managed his club to a 46-34 record.

Haku ran into off-field problems in 1983, being arrested for adultery. He was fired as manager of the Blue Dragons but caught on as a player-coach with the Sami Superstars. Haku batted only .190/.261/.281 as age was catching up to the 39-year-old.

He has also been a hitting coach for Yonsei University, the Hanwha Eagles and SK Wyverns. Additionally, he has worked as a baseball commentator on TV.