Jimmy Ring won 118 games in a dozen seasons in the majors and led the National League in bases on balls in four straight seasons. He is also well-known as a part of the Rogers Hornsby-Frankie Frisch trade in December 1926.

Born in Brooklyn, New York, Ring began his minor league career with the Lowell Grays in 1914, going 17-14. After winning 26 for the Utica Utes in 1916, he was drafted by the Cincinnati Reds, led by skipper Christy Mathewson. 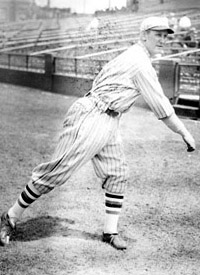 Ring made his major league debut in April 1917 and played for the Reds for four years, primarily seeing action as a starter. The New Bill James Historical Baseball Abstract says that he was allegedly paid $25 by Hal Chase after losing a game in 1918, but no action was taken. The book Eight Men Out states that Chase offered money to Ring if Ring threw the game, but that Ring snubbed him; when the Reds lost the game, Chase slipped him 50 dollars, and Ring reported it to Mathewson. Mathewson reported it to the League, but Chase was acquitted on the basis of insufficient evidence.

In 1919, Ring won 10 games and posted a career-best 2.26 ERA as Cincinnati won the NL pennant, and he pitched 14 innings in the World Series tainted by the Black Sox. He earned a win in Game Four after throwing a three-hitter against Eddie Cicotte. Pitching on only two days' rest, he threw five innings of relief in Game Six, giving up only one run, but that run was a tenth inning run that won the game for Chicago.

After going 17-16 for the Reds in 1920, Ring was traded along with Greasy Neale to the Philadelphia Phillies for future Hall of Famer Eppa Rixey. He spent five seasons with the team, who finished well below .500 each year. In spite of that, he managed to go 18-16 in 1923, winning twice as many games as any other pitcher on the squad. He also led the NL in walks in each year from 1922 to 1925. The Phillies Nation website lists him as # 72 of the 100 Greatest Phillies, saying that "Ring is another of those better-than-average pitchers that are pretty scarce in Phillies history."

New York Giants manager John McGraw acquired Ring for Jack Bentley and Wayland Dean following the 1925 season. About a year later, he was traded along with Frankie Frisch to the St. Louis Cardinals for Rogers Hornsby. After going winless in a season with the Cardinals, he was dealt back to the Phillies, with whom he ended his major league career. He pitched briefly in the minors with the Newark Bears and Toledo Mud Hens in 1929.