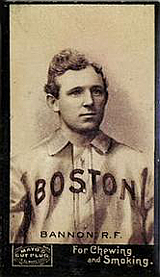 "Jimmy Bannon slugs the first of his rookie-leading 13 home runs; his victim is the NL's best pitcher in 1894, Amos Rusie" - the entry for May 22, 1894 in The Baseball Rookies Encyclopedia

Outfielder Jimmy Bannon displayed a variety of talents in his four years in the big leagues. Although standing only 5' 5" tall, he was among the home run and stolen base leaders in 1894, when he played for the Boston Beaneaters, and also led the league in outfield assists. In 1895, he was among the leaders in doubles and finished second on the team in batting with a .347 average, just behind Hall of Famer Hugh Duffy at .353. He also pitched but was less successful, giving up 23 runs in 9 innings of work.

Jimmy also had a long minor league career, playing pro ball from 1891-1910. He spent quite a few years playing in Canada for Toronto and Montreal, and otherwise played most of his career in the Northeastern part of the U.S. In 1894, he umpired one National League game. The New York Times of January 7, 1915, said that Bannon was angling for the job as manager of the Providence Grays; the job ended up going to Dave Shean.

He was the brother of Tom Bannon and minor leaguers George and William Bannon.