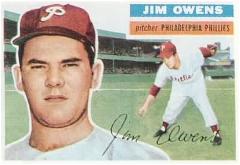 Jim "Bear" Owens was originally signed by the Philadelphia Phillies in 1951 and he played in the minors until 1955 - the year of his major league debut. His first game came on April 19th at the age of 21, but he only pitched three times that season. His first two years in the majors were fairly poor - his record was 0 and 6 with an ERA of 7.51.

He missed the 1957 season due to military service, then in 1958, he appeared in one game, pitching seven strong innings for the win. His ERA in that game was 2.57. He was in the military during most of this time.

He spent the final four seasons of his career with Houston. He was used almost entirely as a reliever for them, pitching in a total of 148 games with them and starting only 11 (all in 1964). He even led the team in relief appearances in 1965 with 50, the first season they were known as the "Astros".

He had a .954 fielding percentage. According to Baseball-Reference similarity scores, he is most related statistically to Boom-Boom Beck. According to The Baseball Cube, he spent nine major league seasons as a teammate of Turk Farrell - longer than any other teammate.