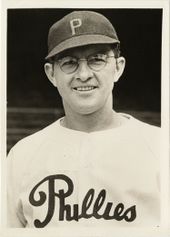 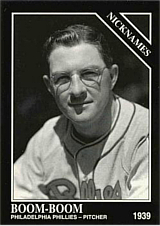 “Beck was easily the outstanding member of the pitching staff for the first ten days of the season… Beck is the best young Brooklyn pitcher unveiled since Dazzy Vance.” - The Sporting News, April 27, 1933

As an after-dinner speaker, the loquacious Beck later left audiences shaking their heads as he lamented that America was in danger of giving baseball back to the Indians. Pitching for atrocious teams but performing none too well himself, he had only two winning records in 12 major league seasons, a 1-0 mark in six games in 1927 and an 8-5 record split between the Reds and the Pirates in the war-weakened 1945 season, his last. He won his last game while coaching at Toledo (American Association) in 1951, pitching a 10-2 win over Minneapolis at the age of 46 to bring his total professional mark to an even .500.

Beck managed in the minor leagues for four years, three years for the Pirates' system and the final year with Detroit. In 1946, he skippered the York White Roses; in 1947, he finished out the season managing the Selma Cloverleafs; and in 1948, he piloted the Fort Wayne Generals. In 1949, he was the second manager of the season for the Butler Tigers. Beck was also a Washington Senators coach from 1957 to 1959. As pitching coach, Camilo Pascual credits Beck for turning his career around and developing the Cuban right-hander's devastating sidearm curve. Starting in 1960, Beck was a minor league coach for the Milwaukee Braves and features in Pat Jordan's memoir, A False Spring.

From Baseball Library: Boom-Boom Beck supposedly earned his nickname while pitching for Casey Stengel's Dodgers in 1934. Becoming upset during a July 4th game when Stengel came out to remove him when the Dodgers still had a lead, Beck angrily threw the ball into right field at the old Baker Bowl in Philadelphia, PA. The ball hit the tin-plated wall and caromed to center. The "boom-boom" of the rebound roused hung-over centerfielder Hack Wilson, who was daydreaming during the pitching change and thought the game had resumed. Wilson pursued the ball and fired a strike back to the infield.

From Baseball Digest: In the second game of a double header on July 4, 1934, the Brooklyn Dodgers were playing the Phillies in Philadelphia at Baker Bowl which had a high tin fence in right field. During the game, Dodgers manager Casey Stengel went out to the mount to remove the pitcher, a burly right-hander who was then generally known as Walter Beck. Casey felt that the Phillies had been hitting Beck pretty hard. Beck didn't agree.

In right field for the Dodgers that afternoon was Hack Wilson, who after several years of starring and drinking with the Cubs had been traded in 1932 to Brooklyn, where after one good season he mostly concentrated on drinking. If he had been asked, Wilson would have agreed with Stengel's evaluation of Beck's pitching. Hack was exhausted from chasing baseballs hit by the Phillies off the tin fence behind him, and as Casey talked to the pitcher, Wilson leaned over with his hands on his knees, his head down, his eyes closed. On the mound, Beck argued with Stengel. He didn't want to be taken out.

"Give me the ball," said Stengel. "No!" said the pitcher who turned and flung the ball into right field, over Wilson's head and against the tin wall. The startled Wilson, his head still down, heard the ball boom against the tin, thought it was another base hit and leaped into action. He raced back, fielded the ball off the wall, turned and threw a perfect strike into second base. Walter Beck was known as Boom-Boom Beck after that. And not long after, Wilson was traded to Philadelphia.

--By Robert W. Creamer from his book Stengel His Life And Times