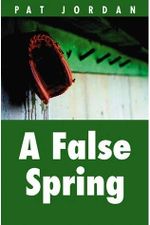 A False Spring is baseball writer Pat Jordan's description of his experiences as a player in the Milwaukee Braves minor league system. It was originally published in 1975 but has been reprinted a number of times since.

The book is a reflection on promise gone wrong. As a youth growing up in Connecticut, he was always the best player around, easily throwing harder than anyone else and watched over by scouts in his senior year of high school. His parents and older brother were all focused on helping him achieve baseball stardom, with his brother, a lawyer, acting as his agent. He was highly sought-after in those days before the establishment of the amateur draft, and he was courted by a bunch of teams, turning down the New York Yankees - the team he had always rooted for - in order to sign with the Braves, who offered a slightly larger signing bonus.

That decision turned out to be a harbinger of what would go wrong. In his senior year, Jordan no longer focused on pitching well, but on landing the largest bonus possible, as a marker of his worth as a young man. Thus he was more interested in wowing the scouts with the speed of his fastball than with actually pitching. It worked in that he landed one the largest bonuses the Braves granted that year, but it marked the beginning of a downward spiral he would not be able to end.

His first season, with the McCook Braves in 1959, was a disappointment, as he threw impressively hard but hardly ever put it all together while some apparently less talented teammates did a lot better than he did. He also had trouble adapting to life in a small Midwestern town as an 18-year-old who had always been coddled and did not get along well with teammates or his landlady. After spring training at the Braves' minor league complex in Waycross, GA in 1960, he was sent down to the Davenport Braves of the Midwest League where hardly anyone could get a hit off him, but he regularly fell into bouts of walking everyone in sight, before mysteriously finding his control again. His personal life was also a mess, as he tried to develop an aloof personality to put his younger teammates in awe (he was now a grizzled veteran of one professional season surrounded by first-year pros), but this just made his loneliness and general bad temper worse. In spite of his struggles, he was picked to play in the Florida Instructional League that fall, and did surprisingly well, surrounded by the best prospects in the organization, most of whom would eventually play in the major leagues. He eased up on trying to blow every pitch past the batter, and this new approach paid dividends, although his strikeouts were down.

However, in spring training in 1961, he came up with a case of "Steve Blass disease", before the condition had been given a name, as he became seemingly unable to reproduce his pitching motion. Pitching coaches Boom-Boom Beck and Gordon Maltzberger were completely useless in setting him straight, and he began to pitch less and less for the lowly Eau Claire Braves of the Northern League. This happened as his new wife, his former high school sweetheart, was now living on the road with him for the first time, and his struggles on the field were not helping his marriage get off to a good start. Disgruntled at not being given a chance to pitch by manager Jim Fanning, he left the ballpark during a game in Winnipeg, MB, heading back to Wisconsin on a Greyhound bus. That did not impress the Braves' brass, who suspended him, but gave him a final chance by assigning him to the lowest rank of the team's farm system, the last-place Palatka Azaleas of the Florida State League, described as the "elephant's graveyard" of the organization, filled with other failed prospects on their way to oblivion. After a hypnotic 30-hour drive with his wife Carol, he arrives in the swampy small town to find a scene out of a horror movie, but pitches a little better. But he understands it's because he's fallen as low as one can go, and that there is no way back. He leaves the team with two games left in the season, driving back north with the understanding that his baseball career is over and that his talent, the one thing that had defined him as a person is gone. The book ends as he contemplates what will be the start of his adulthood.

The book is considered a classic of baseball literature because of its magnificent prose, its vivid description of the featureless small towns he lives in, and the honesty with which Jordan reflects on his failures as a player and as a person. He was an immature and self-entitled jerk as a young man, and a decade later, realizes that fully and doesn't shy away from exposing this. The book also contains great portraits of teammates, some of whom would go on to be famous, like Rico Carty, Ron Hunt or Phil Niekro (who was the lowliest pitcher on the totem pole at McCook when the two met), and others who also failed to make it for various reasons, such as Pat Sherrill, who plays third base for Eau Claire but whose true dream would be to become a stock car driver, or OF Tim Strickland, who leads the FSL in batting for the lowly Azaleas but sees a young Pete Rose catching up on him and has a mental breakdown as a result. Managers and coaches also feature prominently, such as Bill Steinecke, his manager at McCook; a very old and no longer interested Travis Jackson at Davenport; Ben Geraghty, too good at getting prospects to develop their talent to earn the job he really wants, that of manager of the major league Braves; and pitching coach Whit Wyatt, the only one who manages - albeit temporarily - to make him live up to his talent.