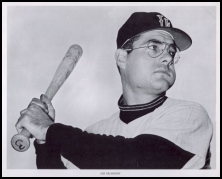 Outfielder Jim McAnany, an 18-year-old amateur free agent, was signed by the Chicago White Sox before the 1955 season. Jim's first assignment was with the Waterloo White Hawks of the Three-I League where he appeared in 55 games and hit .260. Jim had a good season with the 1957 Davenport DavSox, hitting at a .303 clip and cracking 17 homers.

In 1958 he was hitting an even .400 for Colorado Springs Sky Sox of the Western League with 28 homers but in moving up to the Indianapolis Indians of the American Association he "fell off" to .382. When finishing up the year with the major league Chicago White Sox, he made 13 plate appearances without a hit to close out the season.

The next four seasons, Jim was with the White Sox at one time or another. They recalled him mid-way in 1959, the year they were defeated by the Los Angeles Dodgers in the World Series, from ndianapolis, where he was hitting .315. He gave the "Go-Go Sox" solid play in the outfield and hit .276 in 76 games. McAnany appeared in three games in the World Series, getting 6 plate appearances with no hits and was unable to contribute to the White Sox's postseason needs. Jim's last good season was in the minors in 1961 with the Houston Buffaloes when he hit .318 and had 8 round-trippers.

McAnany's last two years in baseball were like a wild ride on a Merry-Go-Round. The White Sox traded him to the Chicago Cubs in 1961 and he failed in two short stays with them at Wrigley Field in 1961 and 1962. After short stays with the San Diego Padres and the Seattle Rainiers of the Pacific Coast League in 1963, he was out of baseball. Jim had been in pro baseball 8 seasons (1955-1963) and his five short appearances in the majors showed him with a lifetime .253 batting average. He was much better in the minors, where he finished up with a career .302 average and 74 homers.

After baseball, Jim entered the insurance business in Culver City, CA. His daughter, Michelle, was a member of the Colorado Silver Bullets women's professional baseball team in the mid-1990s.