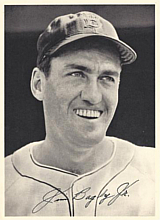 The son of Jim Bagby, Sr., both Jim Bagby Jr. and his dad spent the bulk of their careers pitching for the Cleveland Indians. Jim Jr. had success before World War II and after, but his greatest success was during the war.

Born in Cleveland while his father was pitching for the Indians, Bagby grew up around Atlanta. He was affected by a noticeable harelip which was never fixed. He learned pitching from his father and wanted to be a baseball player from a very young age - against the wishes of his mother, who wanted him to receive a proper education - but his plans were interrupted when he suffered "dead arm" as a teenager and had to give up pitching for three years. He began to recover his old form at 15, and soon began playing for semi-pro teams around the state of Georgia. He was offered a trial with the Cincinnati Reds during spring training in 1935, but failed to attract anyone's attention and left camp. His father arranged for him to work out in front of Joe Cronin of the Boston Red Sox when the team passed through Atlanta later that spring, which led to his first contract.

Bagby started his professional career with the Charlotte Hornets of the Piedmont League, going 13-9 and pitching 218 innings in 1935. The Sox switched their affiliation to the Rocky Mount Red Sox in the same circuit in 1936, but he fell to 9-12 with an ERA of 5.11. Jim moved to the Hazleton Red Sox in 1937 where he went 21-8, 2.71. He led the new York-Penn League in wins and was named league MVP, paving the way for his major league debut at the start of the next season. As a 21-year-old rookie in Boston in 1938, he went 15-11. He started on Opening Day, April 18th, against the New York Yankees, the defending World Champions, going 6 innings and earning the win. Lefty Grove went 14-5, Jack Wilson went 15-15, and Fritz Ostermueller went 13-5 for that team while Hall of Famer Jimmie Foxx drove in 175 runs. The team finished second in the American League to the New York Yankees.

Jim Jr. was traded to his dad's old stomping grounds, Cleveland, after the 1940 season. In 1941, he was on the mound to end Joe DiMaggio's record hitting streak at 56 games: with the Indians facing the Yankees on July 17th and some 60,000 persons in attendance at Cleveland Stadium, he came on in relief of Al Smith in the 8th with DiMaggio still hitless; he faced him once, threw him "just fastballs" and got him to ground into a double play with all of the nation's media focused on the game. He was only 9-15, 4.04 that season, but went 17-9 in 1942 on a team that finished under .500. He was third in the league in victories and was named to the All Star team, pitching the second-most innings in the league. The next year, 1943, he went 17-14, pitching the most innings in the league. He was fourth in the league in victories, and again was named to the All Star squad.

He spent some of 1944 in the Merchant Marines, resigning and taking the Army physical. After the war, he was dealt back to Boston, who won 104 games and went to the 1946 World Series. He went 7-6 in the regular season, starting about half his games. In the Series, he appeared once, pitching three innings in Game 4. He finished his career, just like his pop, with the Pittsburgh Pirates, going 5-4 on the 1947 squad that finished near the bottom of the National League. The team leader in wins was his old teammate Fritz Ostermueller, who had 12.

Jim continued to pitch in the minor leagues until 1950, then returned to Atlanta where he worked as a draftsman in the aeronautic industry. He retired to playing golf in the 1980s, even though cancer, the result of a lifelong smoking habit, forced him to have his larynx surgically removed in 1982. The cancer reappeared in 1988 and he passed away from its effects on September 2nd. He was elected to the Georgia Sports Hall of fame posthumously in 1992, an honor that had earlier been bestowed on his father as well.