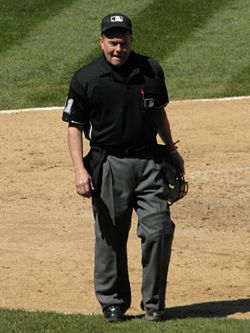 He made a controversial call in Game 3 of the 2009 NLDS, ruling that a ball hit by the Philadelphia Phillies' Chase Utley was fair, although replays showed that it had touched his foot in the batter's box and should have been ruled a foul ball. The hit was a key to the Phillies' winning run in the 9th inning in a 6-5 win over the Colorado Rockies. He was involved in another highly controversial call in a game between the Pittsburgh Pirates and Atlanta Braves on July 26, 2011 at Turner Field. He ruled that the Braves' Julio Lugo was safe at the plate on a not-particularly close play that ended a 19-inning marathon between the two teams, giving the Braves a 4-3 win. Replays showed Pirates catcher Michael McKenry had successfully tagged Lugo, but Meals explained that he had seen the sliding Lugo pop up just before the tag and thought he had avoided the ball. Immediately after the game, the Pirates filed a formal complaint about the call with the Commissioner's office. The following day, after watching video replays, Meals acknowledged that he had made a mistake, as did MLB Vice-President Joe Torre, who added however that the call was part of the game's human element and would not be reversed.

Meals was again at the center of controversy the following season, with the New York Yankees and Baltimore Orioles involved in a neck-and-neck pennant race on September 8, 2012 at Camden Yards. He called the Yankees' Mark Teixeira out when sliding head-first into first base while trying to break up a game-ending double play in the 9th inning; the tying run would have scored had he called Teixeira safe, and the Yankees were convinced they had been robbed of a key win, publicly blasting the veteran umpire's call after the game. Controversy again hit him on July 29, 2013 in a game between the Tampa Bay Rays and Boston Red Sox with first place at stake in the AL East. In the 8th inning, pinch-runner Daniel Nava apparently slid safely under Jose Molina's tag for the game-tying run, but Meals, who was standing behind the Rays' catcher and thus had an obscured view, called Nava out. Red Sox manager John Farrell was ejected in the argument which ensued, and the game ended with a 2-1 Rays win; after the game, Meals admitted he had not made the right call in view of video evidence.

Meals became a crew chief on an interim basis in 2014 and permanently in 2015.