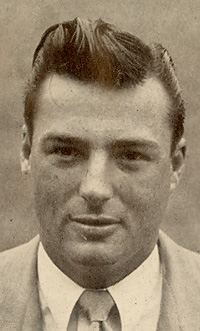 When he returned to Penn in 1946, he rejoined the varsity football team as a lineman, and served as captain. He also played first base on Penn's varsity baseball team, serving as its captain in 1948. McCarthy was honored by his senior class as Bowl Man and received his Bachelor of Science Degree in Economics in 1948.

He was signed by the Browns as an amateur free agent on June 15, 1948 (date given is approximate. Exact date is uncertain.) He broke into Organized Baseball in 1948 at age 25 with Columbus in the South Atlantic League and almost immediately was promoted, playing June 19, 1948, with the Browns. He played first base in two games for the Browns and finished his big-league career four days later.

He returned to the minors with the Elmira Pioneers in the Eastern League (1948); San Antonio in the Texas League (1949); and Springfield in the Three-I League (1949), ending his baseball career at age 26.

McCarthy later became an advertising salesman for the Army Times Publishing Company, in New York City. Living in Freeport, Long Island, he died at age 42 in Oceanside, NY from a heart attack on October 3, 1965 and is buried at Holy Rood Cemetery in Westbury, NY.

==Awards and honors== Named Bowl Man at the University of Pennsylvania, 1948