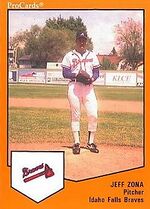 Jeff Zona pitched for two seasons in the minors then became a scout.

Zona was a Boston Red Sox scout for 16 years then moved to the Washington Nationals. He signed Daniel Bard, Aaron Bates and Cla Meredith.