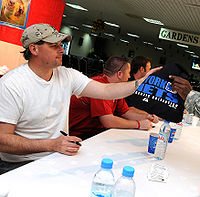 Turk Wendell pitched 11 seasons in the majors, almost all as a reliever. Most of his career was with the Chicago Cubs and then the New York Mets. He appeared in the 2000 World Series. A workhorse, he had 70+ games in a season four times, and in total 552 games in his major league career, putting him at # 259 on the all-time list (as of 2010) for most games pitched.

Wendell is the only major league player to come out of Quinnipiac University.