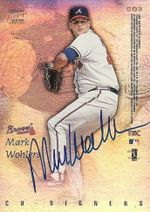 Pitcher Mark Wohlers had a cameo in a sketch on Saturday Night Live on December 13, 1997.

His fastball was timed at 103 mph in a 1995 spring training game. However, Wohlers will always be remembered for giving the game-tying three-run home run to Jim Leyritz of the New York Yankees in Game 4 of the 1996 World Series. After that moment, he was never the same pitcher that he once was, as he began to struggle with his control and command, although there was nothing physically wrong with him. As a matter of fact, on August 22, 1998, the Atlanta Braves placed him on the disabled list listing as the reason "inability to pitch", making him one of the most prominent pitchers to have had his career derailed by a case of the "yips". He returned to pitch a few more seasons, but was never again dominant as he bounced from team to team.