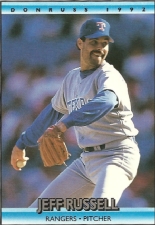 Jeff Russell is the father of pitcher James Russell. They were the fourth father-son combination to both save a game in the majors since saves were officially tracked, joining Julio Navarro/Jaime Navarro, Pedro Borbon Sr./Pedro Borbon Jr. and Steve Grilli/Jason Grilli.

He started his career as a starting pitcher with the Cincinnati Reds in 1983 and 1984, but after going 6-18 the second year, he was traded to the Texas Rangers with OF Duane Walker for 3B Buddy Bell. He went only 3-6, 7.55 in 1985 and was sent down to the minors. When he came back in 1986, he had been moved to the bullpen and stayed there in 1987 as well. In 1988, he went back to the starting rotation, and while his record was only 10-9, he made the All-Star team thanks to a strong first half in which he went 8-2, 3.16. After he faded in the second half, he was back in the bullpen in 1989, but now as the closer, and made the All-Star team again. It was an outstanding season all-around as he went 6-4, 198 in 71 games with 38 saves, tops in the American League. He won the two competing relief pitcher awards in the AL that season, the Rolaids Relief Award and the Reliever of the Year Award.

After this breakout season, he slumped in 1990 when an injury limited him to 27 games, although he did pick up 10 saves. He bounced back in 1991 to go6-4, 3.29 with 30 saves. He did even better in 1992, with 28 saves to go with a 2-3 record and 1.93 ERA in 51 games by the end of August. He was then included in one of the biggest trades of that era as the Rangers traded him, young star outfielder Ruben Sierra and starting pitcher Bobby Witt in return for superstar OF Jose Canseco. At the time, journalists were calling this a trade of two future Hall of Famers although both Sierra and Canseco would eventually fall short of the career numbers that were predicted for them. Jeff pitched well for the A's in September, going 2-0 with 2 saves and a virgin ERA in 8 games. He played in the postseason for the first time of his career, appearing in three games in the ALCS against the Toronto Blue Jays.

He became a free agent after the 1992 season and signed with the Boston Red Sox for 1993 and had another good season, saving 33 games with an ERA of 2.70. However, he slumped in 1994, going 0-5 with saves and an ERA of5.14 in 29 games and on July 1st was traded to the Cleveland Indians for Steve Farr and Chris Nabholz, both of which were pretty much washed up. He did not do much better for Cleveland before the strike put a premature end to the season, going 1-1, 4.97 with 5 saves in 13 games. In 1995 he returned to Texas as a free agent and saved 20 games in just 37 appearances that year. He returned for one final season in 1996 but was no longer the closer, recording just 3 saves. Still, he continued to pitch well, going 3-3, 3.38 in 55 games as the Rangers made the postseason for the first time in franchise history. He pitched twice in the Rangers' loss to the New York Yankees in the Division Series - the final appearances of his career. He ended his career with 186 saves.

Jeff's son James is married to Nikki Witt, the daughter of Bobby Witt, who was Jeff's teammate with both Texas and Oakland. Jeff is therefore also the uncle-in-law of Bobby Witt Jr..