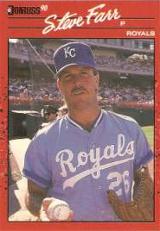 Steve Farr is one of only two players to come from American University in Washington, DC, along with Mark Smith, who was drafted a year later and came to the majors a year earlier. In 1990, despite having a 1.98 ERA over 57 appearances which included 13 wins, Farr did not receive a single vote for the Cy Young Award.

He pitched 27 consecutive scoreless innings on his way to 14 consecutive saves in 1991 as a member of the New York Yankees.