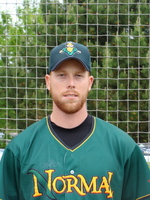 In 2008, he started out pitching for the McKinney Blue Thunder in the Continental Baseball League (0-2, Sv, 1.37), and then finished the season throwing for the Grand Prairie Air Hogs in the American Association (one run in two innings).

Furrow only appeared in one game for the Coastal Kingfish in the Continental Baseball League during the 2009 season, allowing a hit and a walk and retiring none.

Jason signed with the Normal CornBelters on February 16, 2010.

Furrow made his first appearance out of the bullpen for the CornBelters on May 23 against the Evansville Otters. He threw 4.0 innings to earn his only save giving up only 1 run on 4 hits, walking 2 and striking out 2.

On July 20, Jason started his first game against the Gateway Grizzlies. He gave up 4 runs on 6 hits, walked none and struck out 2 in 3.1 innings of work. He did not figure in the decision. The CornBelters went on to defeat the Grizzlies 6-4.