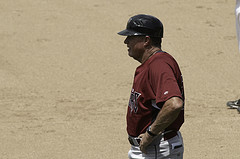 Jack "Dusty" Rhodes won over 1,000 games as a college coach and coached for three different countries on the international stage.

Additionally, Rhodes coached for the 1982 Greensboro Hornets, managed the Helena Brewers in 1988-1989 and coached for the 1990 Beloit Brewers. He worked with three different national teams. He coached for Team USA in the 1993 Intercontinental Cup and 1994 Baseball World Cup, for the Australian national team in the 1996 Olympics and for Team USA in the 2001 Baseball World Cup (they won Silver). He then coached the Greek national team to a Silver Medal at the 2003 European Championship and managed them in the 2004 Olympics and 2005 European Championship.

After leaving the college ranks, Rhodes became a coach for the Wisconsin Timber Rattlers in 2011-2013.