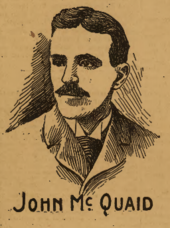 Jack began as a player, appearing in 1883 for Bay City and the Peoria Reds. He was an outfielder for Peoria again in 1884; in 14 games, he hit .241/?/.352 with 13 runs before an arm injury ended his playing career. McQuaid began his umpiring career in the American Association in 1886, remaining in that loop for three years. On June 18, 1887, he and Bobby Mathews were the first two-umpire team to work a regular season game in the majors. McQuaid then was in the National League from 1889 to 1891. He admitted to a mistake in a 1890 game, refusing to let Philadelphia send in Bill Gray as a substitute; the game was thrown out after his admission.

McQuaid did not get along with NL president Nick Young, for complaints over being docked pay when he was ill. He also did not get along with players, whom he frequently ejected. When there were rumors that McQuaid was planning to jump back to the AA before the leagues merged in 1892, Young canned the umpire. McQuaid worked in the Western League to open the season. In July, though, Young brought him back to the NL due to the quality of his work. He remained in the NL until his early death from a heart attack in 1895.