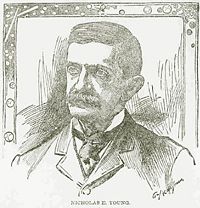 "William Barnie (was) probably the best known baseball man outside of Nick Young in the country . . ." - from the July 1900 obituary of Billy Barnie

Nick Young was a key pioneer in the development of professional baseball.

Young, born in 1840, had played cricket from the age of 18. He managed some amateur baseball clubs in the 1860s and had also played amateur ball with the Washington Olympics in 1869-1870 before the National Association was formed. It was Young himself who suggested the meeting that led to the formation of the Association, and he became owner and manager of the Olympics in 1871, as well as secretary of the Association. He also managed the Washington Blue Legs in 1873. He was also one of the most active umpires in the National Association, with a total of 71 games during the five years it was in existence.

When the National League was formed, Young became secretary of the League and then president from 1881-1903. He was president during the famous conflict that led to the formation of the short-lived Players League in 1890.