Washington fielded a team in the National Association in 1871 and 1872. That team was known as the Olympics. The Olympics had a combined record of 17-22 in their two-year existence. The Olympics had been a well-known amateur team before joining the N.A.

In a league with nine teams, the Olympics finished in fourth place with a record of 15-15 under manager Nick Young. 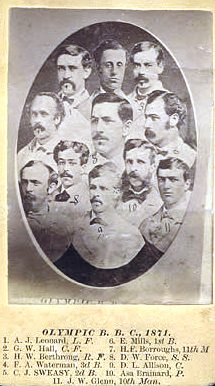 In their second and final year of existence, the Olympics fell to 10th place (out of 11 teams) with a record of 2-7. The team was again managed by Nick Young.

The Washington Blue Legs played in the National Association in 1873.

The sole year of the Union Association saw an alternate use of the Nationals name. The American Association also had a team of the same name in 1884. The UA team fared far better than its A.A. counterpart, finishing in 7th place with a 47-65 record.